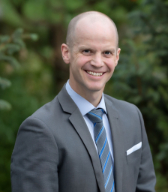 Chris is a local, hometown guy, having grown up in Red Deer – the youngest of five boys. As a youth, Chris participated in high school and community sports, as well as scouting with Scouts Canada. He continues to be involved in the Red Deer community, including formerly as a Red Deer City Councillor from 2010 to 2013, and also as past president of the Red Deer Construction Association. Chris has also served as the president of the Red Deer LEADS Executive Association, and was previously a board member with the Canadian Home Builders Association – Central Alberta. Chris has been actively involved in leadership positions for his church and currently mentors youth in a leadership role. Chris and his wife Laura have four young and active boys.
After two years of studying Business at Mount Royal University in Calgary, Alberta, Chris studied law at the University of Saskatchewan, receiving his law degree in 2007. Chris went on to study business at Queen’s University in Kingston, Ontario – where he received a Master’s of Business Administration (MBA) in 2008. It was during this time at Queen’s that he developed a passion for entrepreneurship, serving as President of the New Venture’s Club at the University.

In 2009, Chris completed his articles with both Walton International Group and Gowlings out of Calgary, AB to become a member of the Law Society of Alberta. Later that year, Chris also passed the New York Bar Exam and became licensed as both an Attorney and Real Estate Broker in the State of New York.

Since 2010, Chris has facilitated over 5000 real estate transactions. He has established himself as a leading Central Alberta real estate, estate planning, and business lawyer, having been ranked since 2016 on threebestrated.ca in all three categories. In his practice, Chris prioritizes client satisfaction – he has received over 100 5-star reviews on Google, and was voted by Red Deer citizens as Red Deer’s Favourite Lawyer for 2018.

Chris is a strong advocate of a collaborative approach to the practice of law – meaning that he strives to work respectfully with other members of his firm, with you the client, and with other professionals involved in your transaction or service, in order to provide you with exceptional legal service in a relaxed, timely, and affordable manner.

Please feel free to contact us if you have any questions that aren’t answered on our site, or to schedule an appointment. We’re always happy to chat with you about any of your legal needs.