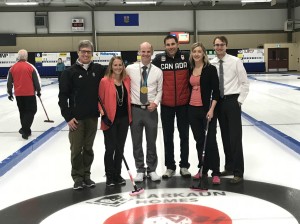 The entire Stephan Law team participated yesterday in the charity event Sweeping with the Stars Bonspiel, with all funds going towards the 2019 Canada Winter Games Plaza. Each team was joined by a celebrity, and we were privileged to curl with David Ford, 5 time Olympian, and World Champion in Men’s Kayaking. In addition, we were privileged to have some coaching by gold medal curler, John Morris.

Being with such incredible athletes, it was easy to learn a few lessons:

In order to get the best training possible, David travels to Europe to train with the best kayakers in the world, because kayaking is primarily a European sport. In 1999, David became the first non-European to win the world championship title. By training with Europeans, David was able to consistently see what level he needed to reach in order to compete with the best.

We learned that one of the most dangerous things about kayaking is actually while trying to rescue someone else. An important part of kayaking is “seeing the line” and when your focus is on something else, you put yourself at risk.

We all had a great time, and our curling definitely improved with each game. It was a surreal experience to be able to hold an Olympic gold medal in our hands, especially as we considered the monumental amount of work that it took to earn it. We appreciate all the hard work that athletes like David Ford and John Morris do representing our country.